Coty is a worldwide cosmetics company behind such well-known brands as Sally Hansen, Rimmel and CoverGirl. At the company’s factory, eight Universal Robots on four mobile carts now automate the picking and packing of products at the powder presses. The mobile solution delivers $500,000 in annual savings while improving both quality inspection and the employee work environment.

For Paul Baublitz, project manager at Coty Cosmetics, the issue was clear: “We currently have twelve presses, and the challenge with automation is always how do you, in a cost-effective manner, automate such a large operation?” Baublitz had multiple reasons for automating, including meeting the company’s drive for increased efficiency as well as addressing the repetitive nature of the task, which was not ergonomically friendly for human operators. This was a task that Coty had previously looked into automating but found that the technology available at the time wasn’t up to the complexity of the application.

Baublitz brought the problem to the engineer at their integration firm , who said, “The challenge for me was to try to determine how I could build a robotic system that was mobile enough to meet their automation needs while still being cost-effective enough to meet their budgetary needs.” Traditional industrial robots are not easily moved around due to safety regulations, which meant that Coty would have to permanently place a robot at each of the 12 presses. This was not within budget. 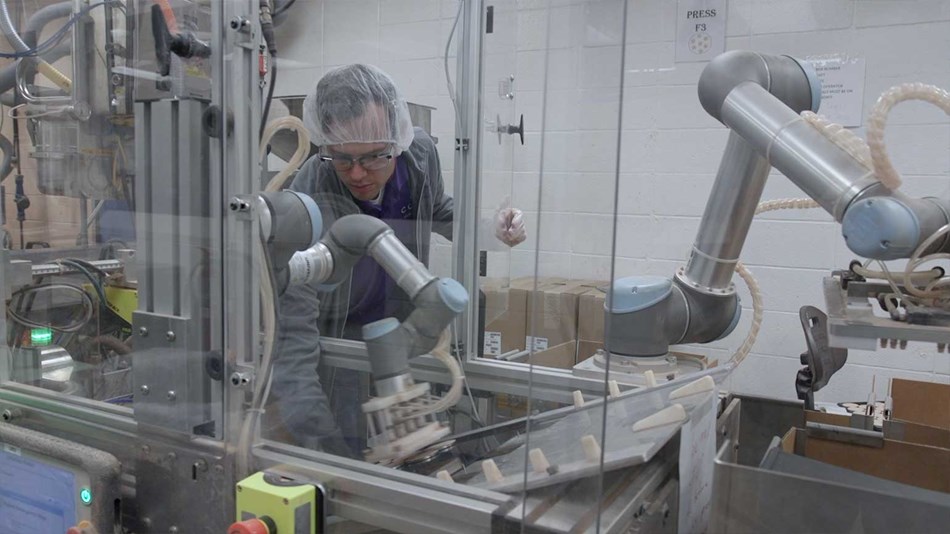 Instead, they looked to collaborative automation. “The Universal Robots seemed a great platform,” he says. “They’re lightweight, they’re easy to use, they’re low voltage, and certainly could work together in the same environment as individuals, so we decided to give the Universal Robots a shot.”

The application involves picking up “godets”, metal pans containing powder cosmetics products, and placing them on trays packaged in boxes and sent to a different department for final processing. In the presses, powder is pushed into the godets, which then travel under a 3D profiler head from Cognex for surface inspection and to measure the volume of powder in the pan. If the godets pass inspection, a UR3 cobot picks them up in groups of two or four, depending on the product, and places them on a tray. When the tray is full, a UR5 cobot picks the tray up and moves it to one of five case locations and places the tray in the case. The UR5 cobot then moves to where empty trays are stored, picks up a tray and places it back in the tray staging area, waiting for the next one to drop in front of the UR3 while it’s loading.

Mobile cobots support fast changeovers for wide product mix
The cobot-based carts currently run up to ten different product “recipes” for different godet shapes, which can range from round to square or rectangular, as well as various thicknesses and weights, and which can come out of the presses one or two at a time. The carts are designed for up to 20 product “recipes.”

Set-up time and changeovers were key challenges to overcome in the application. With Universal Robots, Coty was able to mount a UR3 and UR5 cobot on each of four mobile carts that can be rolled from one press to another. Baublitz says, “It is much more cost-effective than having twelve different stations with robots at them. It made a project go from not being possible from a financial standpoint to being possible. Having them mobile was critical to making the project go forward.” Set-up time for the mobile cobots is typically just 15 to 30 minutes to unplug, move and set up the cobots at a new press.

Collaborative robots are designed for safe operation alongside human workers. However, in order to meet required production rates, Coty needed to push the envelope of the robots’ speed and force outside of the collaborative range. To protect operators, Sydorko added lightweight plexiglass guarding and light curtains. These don’t inhibit the carts’ mobility, but if a worker opens a door or reaches through an active area, the robots immediately drop into a safe collaborative speed. Once the worker shuts the door or moves out of the light curtain, the robots resume their maximum speed.

“You can go as fast as you need to and make sure you can keep up production rates, but you can also be collaborative if that makes more sense. It’s the best of both worlds,” says Sydorko, who often gets asked why he chose Universal Robots rather than a high-speed traditional industrial robot for the Coty application. One of the key reasons is that traditional robots don’t run off a low-power source. “Right now, we’re running the carts off 110 volts,” he says. “We would have to use 240 or 480 volts to run a traditional industrial robot. It gets challenging when you want to move carts and puts operators at higher risk.” The weight of a traditional high-speed robot was also a factor as well as the size of the control platforms. 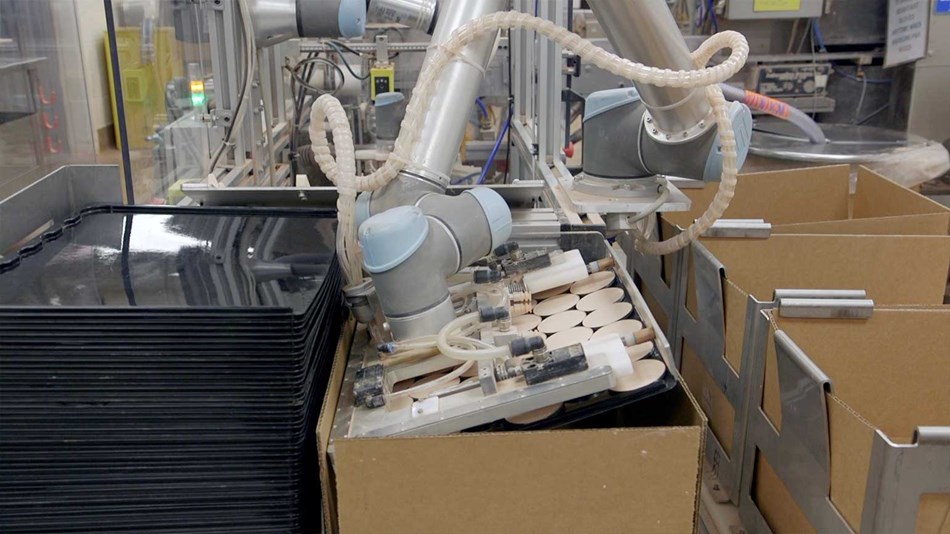 For this collaborative automation project, Coty is projected to save half a million dollars annually going forward. That’s a significant return on investment, but Coty has seen other benefits as well.

The area where the robots work is dusty and noisy, with heavy vibration from the large presses. Now that the robots are working next to these sources, Coty is able to move employees farther away from this environment and redeploy them to less repetitive and more interesting tasks. Baublitz explains, “Once this project is fully completed and running three shifts, five days a week, with four carts, there are going to be thirteen fewer employees working in that area. That’s a significant change for the organization, with a lot of efficiency improvements, and the team’s very excited about that.”

Baublitz also points to new quality initiatives that the Cognex inspection system adds to the automated work cells. Previously, this was one of many tasks that operators performed. “Now there’s a computer doing all of that work,” Baublitz explains. “If you see something that needs to be improved, you can immediately react.”